The tremendous opportunities offered by nearshoring were all the rage at a jam-packed energy conference in Monterrey, Nuevo León on Wednesday. 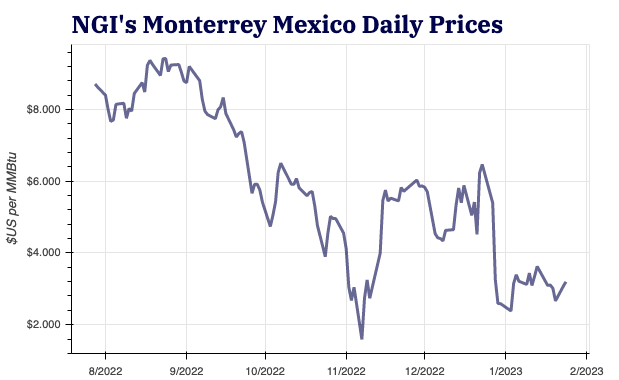 Industry Exchange LLC’s 8th Mexico Infrastructure Projects Forum opened with comments from government officials and executives on the subject. Nuevo León Minister of Economy Iván Rivas said: “We will do everything we can to benefit from US companies that move their companies from Asia to our state.” He highlighted the geography, human capital, infrastructure, industrial parks and the security of the booming state.

Rivas said natural gas is the basis of the nation’s electric power system. “But we have challenges in transmission and distribution,” with power output in Nuevo León doubling to 34 TWh annually over the past 10 years.

Rivas recently attended the World Economic Forum in Davos, Switzerland. The topic of nearshoring is on everyone’s lips there. “Supply chains are changing and becoming more regional. What is sold in North America must be produced here. This is nearshoring or friend shoring…. And everyone cited Monterrey and Mexico as an example.”

He highlighted Nuevo León’s relationship with Texas, which is in close proximity to the event and the world’s eighth largest economy. Of the 140 projects being developed in Monterrey, 51 have US companies. About 30% of the projects in development are in the energy-intensive manufacturing segment.

READ :  Stellantis Introduces Circular Economy, But What Does That Mean?

Almost all of the natural gas used in Monterrey’s industry comes across the border from Texas.

José María Lujambio, Partner and Head of Energy Practice at Cacheaux, Cavazos & Newton, summed up sentiment by saying, “Nearshoring is the kind of opportunity that comes along every 100 years. It has to do with a reshaping of the global order.”

Zamora cited studies showing that nearshoring could add $36 billion a year in additional exports from Mexico.

“But we don’t invest enough in electricity in Mexico,” he said. According to forecasts by the Mexican Ministry of Energy (Sener), demand for electricity will grow by 2.8% per year up to 2035. “We have to invest in generation, but also in transport and distribution. This is the key to our energy security.”

According to Sener, Mexico will need $100 billion in new power plants between 2022 and 2036, or 56 GW of additional capacity over that period. Zamora said that “the political moment with the upcoming change of government is a great opportunity”. The private sector and government “have a lot more in common than many think,” he added.

Northwestern Sonora State Sustainable Development Committee President Francisco Acuña said the “economic opportunities for nearshoring are huge.” Of particular importance is the development of the semiconductor and electric vehicle industries.

He said Sonora is working with the United States on a plan that would expand logistics in the state to capitalize on a shared opportunity. He cited the recent visit to Sonora by Biden administration climate chief John Kerry.

“Nearshoring has a specific mix of logistical requirements,” Acuña said.

The state is developing the 1 GW Puerto Peñasco Solar Power Plant along with other power plants that will add up to 5 GW of new power capacity.

Sonora would also build new roads, expand port, airport and water infrastructure, and develop the entire electric car and semiconductor supply chain. These include mining lithium and other critical minerals, and manufacturing chips, batteries, and electric cars. Sonora is also the site of proposed liquefied natural gas export projects that would use natural gas from the United States.

“We are also working to prepare the talent for country and region challenges in nearshoring,” he added.

Western Jalisco state government Victor Cervantes said power supply and distribution remains a challenge for nearshoring opportunities. Guadalajara, the capital of Jalisco, is a growing industrial center that imports natural gas from the United States via the Waha-to-Guadalajara, or Wahalajara, pipeline system.

“We have a strategy to generate investment schemes with the private sector… We need to make the most of nearshoring,” Cervantes said. He also highlighted the state’s booming agricultural sector and opportunities for biogas and renewable natural gas.

Carlos Garcia, general manager of the Agencia de Energía energy agency in south-east Campeche, said: “We are creating the right conditions for nearshoring. Nobody can complain that we haven’t opened our doors.” He cited 30 years of experience in offshore oil and gas development and strong public-private relationships in the petroleum industry, including natural gas pipelines and industrial parks.

“All doors are open,” he said.

José Ramon Silva of the Comisión de Energía in northern Tamaulipas said it is “a priority of our state to develop hydrocarbons. The Burgos Basin is an extension of the Eagle Ford…. We need to develop the Burgos basin and the natural gas storage facility and that is also a priority for us.”

He said that “expanded natural gas networks will help us develop more efficient industrial parks.” He highlighted the development of desalination plants, the Port of Matamoros, the Sur de Texas-Tuxpan offshore natural gas pipeline, and New Fortress Energy Inc.’s plans for natural gas to export from the state.

“We are very open to private investment and partnerships.”

US Gas and Industrial Development

“We’re working with industrial parks to see where we can develop specific industries… We’re a heavy industry state that’s focused on manufacturing.” He said the 700 MW Villa de Reyes natural gas power plant, which is managed by the Comisión Federal de Energía (CFE) is developed could “change the field”.