A molecular motor that can be powered by electricity has been created.1 Unlike existing single molecule electric motors2.3 the new [3]catenane motor can be operated without a scanning tunneling microscope tip. “Previous electrically driven motors required high vacuum and complex structures for operation,” comments Giulio Ragazzon from the University of Strasbourg in France, who was not involved in the study. “The current system works under mild conditions – an important prerequisite for further advances.”

“Our catenan consists of two small, identical, four positively charged rings and one much larger one [50-membered] cyclic loop,” says Long Zhang of Northwestern University in the US. “There are two different states – an oxidized state and a reduced state – and by varying the voltage we can achieve unidirectional clockwise motion of the two rings around the loop.” Ragazzon points out that rotation in one direction would not occur spontaneously in this system. “Studies like this are impressive advances in the ability to control matter at the molecular level,” he says.

“The researchers used a clever trick to show that unidirectional rotation was taking place,” explains Ragazzon. “They replaced some hydrogen atoms in a ring with deuterium, which allowed them to distinguish between two otherwise identical rings.” 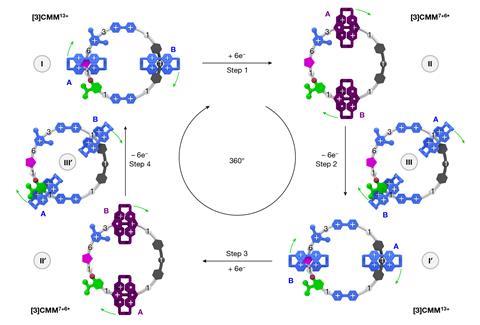 Tibor Kudernac from the University of Groningen, Netherlands, who helped build one of the first single-molecule electric motors in 2011, says the new approach is a “very elegant” way to construct potential energy surfaces using redox chemistry. “What I find so inspiring about this work is that it is based on the same working principle as these Brownian ratchet mechanisms that are widely used in biomolecular machines,” he notes. “Moreover, the system is powered by electrons, greatly increasing the speed of molecular operations and circumventing problems with continuous supply of chemical fuel and waste disposal, two of the greatest obstacles to the sustained functioning of molecular machines.”

READ :  The pros and cons of winter courses

“What we’re doing — like everyone else who’s working in the field of molecular motors, either with chemicals or electricity — is changing the landscape,” explains Nobel laureate Fraser Stoddart of Northwestern University. “It’s about raising energy sources and lowering transition states. Biomolecular and artificial molecular motors control these chemically altered landscapes. Electricity can be introduced if we use an electrochemical cell, so we’re still doing chemistry even though we’re using electricity.’

The tiny electric motor contains an asymmetrical steric barrier. “This asymmetry, combined with the electron-driven switching of optimal binding sites for the two moving rings, is sufficient to cause circular motion of the two rings around the loop,” says Kudernac. The team first attempted to: a [2]Catenan to make the machine, but that didn’t work because the process wasn’t asymmetrical enough.

Zhang says that the [3]Developed on the basis of previous research on molecular pumps, the Catenan motor adds that many electric molecular motors, when attached to an electrode surface, could do useful work by converting electrical energy into mechanical energy.

Stoddart says the interdisciplinary collaboration was critical to the project’s success, noting that the team worked hard over four years. “What I think often gets lost is the amount of intellectual and experimental effort it takes to produce something like this,” he says. “Challenging projects don’t come about overnight. You need people at all levels who know what they’re doing, which means they have to be fairly intelligent, very knowledgeable, incredibly patient and – most importantly – tremendously hardworking.”

Sharing the benefits of nature