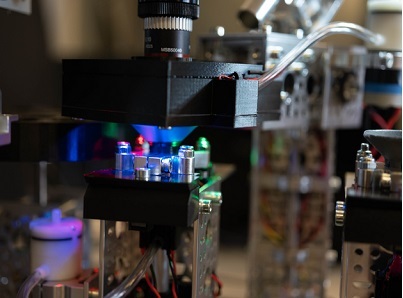 The image here shows the section of Forabot that photographs individual fossils so they can be identified using artificial intelligence. Photo credits: Edgar Lobaton and Thomas Marichatto

Researchers have developed a robot that can sort, manipulate and identify microscopic marine fossils. The new technology automates a lengthy process that is helping people study and better understand the world’s oceans and climate – both today and in prehistoric times.

“The beauty of this technology is that it’s made from relatively inexpensive off-the-shelf components and we open source both the designs and the software for artificial intelligence,” said Edgar Lobaton, associate professor of electrical and computer engineering at North Carolina State University and Co -Author of one in the Geochemistry, Geophysics, Geosystems.

The technology, dubbed Forabot, uses robotics and artificial intelligence to physically manipulate the remains of organisms called foraminifera or forams so that those remains can be imaged and identified. Forams are protists, neither plants nor animals, and have been found in our oceans for more than 100 million years. When forams die, they leave behind their tiny shells, which give scientists insight into the properties of the oceans as they existed when the forams lived.

However, evaluating foram shells and fossils is tedious and time-consuming, which led the team to develop Forabot to automate the process. The robot can use the images to identify the type of foram and sort it accordingly.

To use Forabot, users must first wash and sieve a sample of hundreds of forams. This leaves users with a pile that looks like sand. The foram sample is then placed in a container called an isolation tower. A needle at the bottom of the isolation tower then protrudes up through the sample and lifts a single foram up where it is removed from the tower by aspiration. The suction pulls the foram to a separate container, the picture tower, which is equipped with an automated, high-resolution camera that captures multiple images of the foram. After the images have been taken, the foram is lifted again with a needle until it can be suctioned off and placed in the appropriate container in a sorting station.

“At this point, Forabot is able to identify six different foram types and process 27 forams per hour – but it never gets boring and it never gets tired,” says Lobaton. “This is a proof-of-concept prototype, so we’re going to expand the number of foram species it can identify. And we’re optimistic that we can also improve the number of forams that can be processed per hour. [Right now]Forabot has a 79% accuracy rate in identifying forams, which is better than most trained humans.”

UI researchers find genes that can cause cleft lip and palate