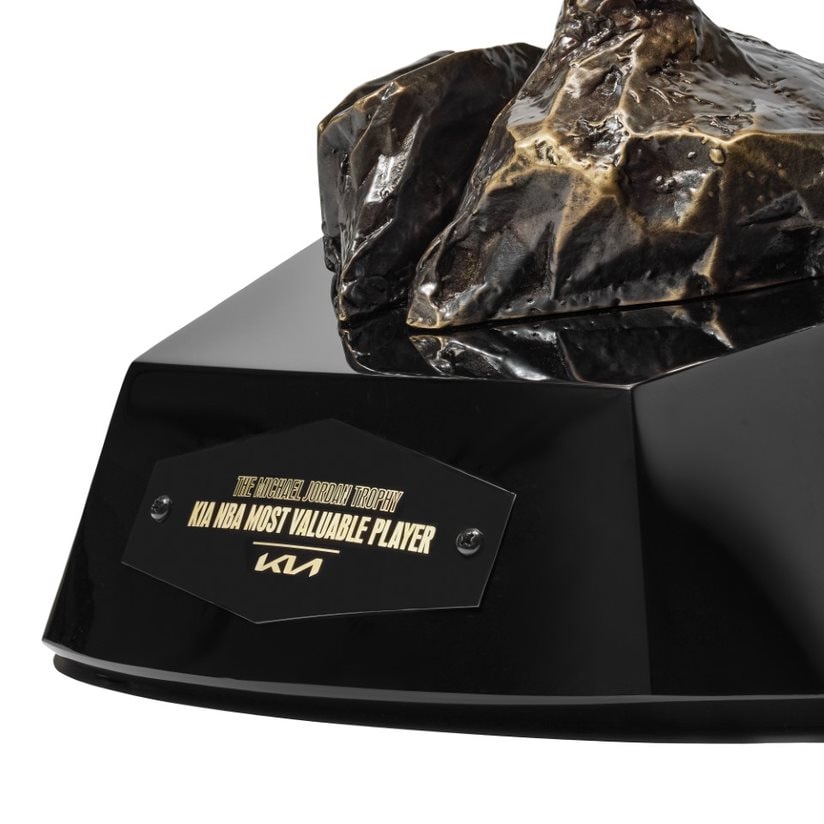 NEW YORK – The National Basketball Association (NBA) today unveiled six newly designed trophies named after NBA legends that will be presented to the winners of the Kia Performance Award at the end of the season. Titled The Michael Jordan Trophy, awarded to the Kia NBA Most Valuable Player, the series of redesigned trophies honors the league’s pioneers who helped define the standards of excellence that these trophies represent.

The league MVP will now be honored with the Michael Jordan Trophy, which bears the name of the NBA legend, widely regarded as one of the greatest players of all time. During his career, Jordan was MVP five times. pic.twitter.com/cWvKXSeQxN

“Our new trophy case celebrates some of the greatest and most influential players in NBA history,” said NBA Commissioner Adam Silver. “As we honor the best players in the league each season, we also pay tribute to the legends who embody these prestigious awards.”

Awarded to the Kia NBA Most Valuable Player 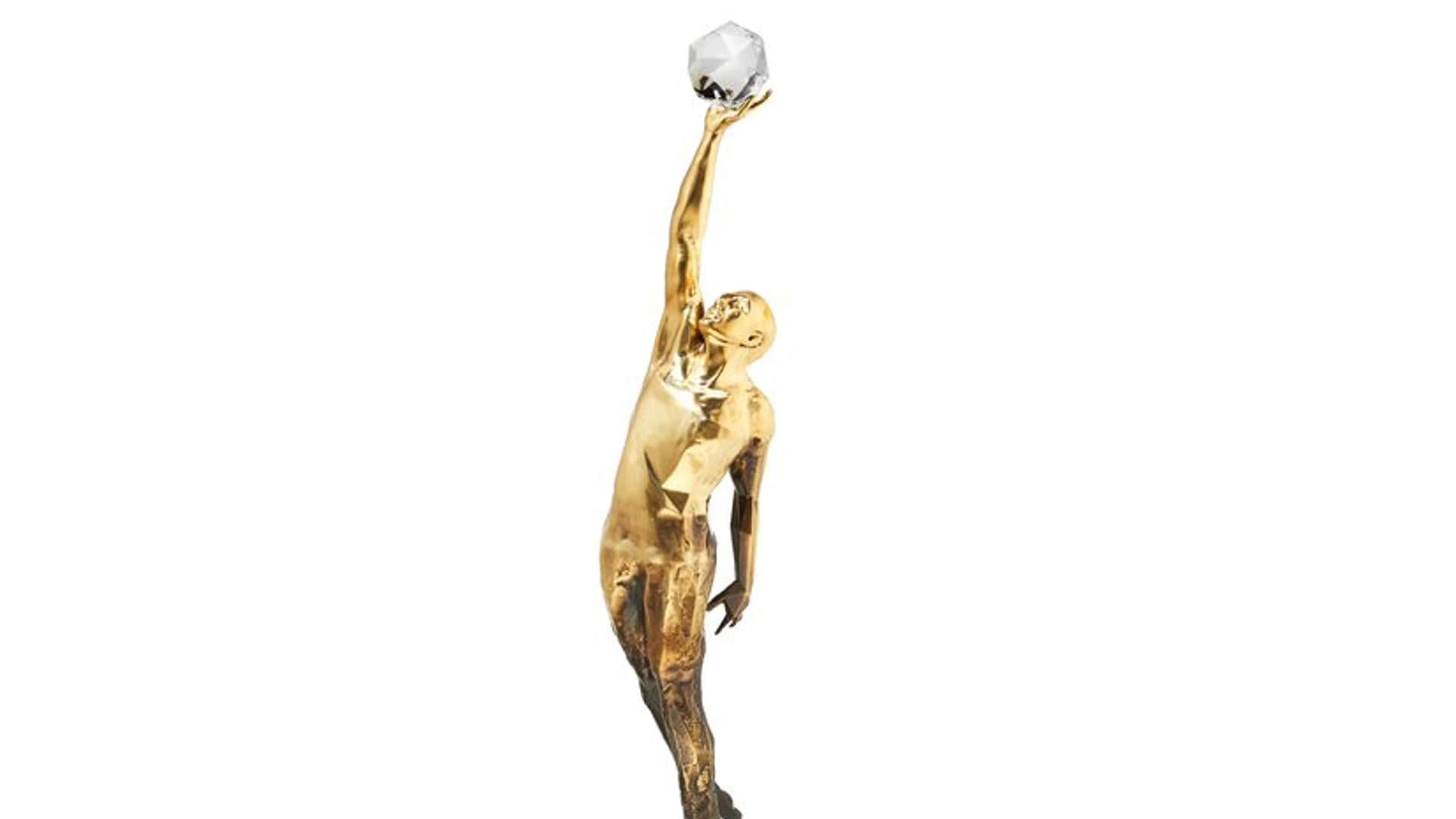 The league MVP will now be honored with the Michael Jordan Trophy, which bears the name of the NBA legend, widely regarded as one of the greatest players of all time. During his illustrious career, Jordan was named MVP five times. The Hall of Famer also received six NBA championships, six NBA Finals MVP Awards, 11 All-NBA Team Selections, 14 NBA All-Star Selections, three NBA All-Star Game MVP Awards, 10 scoring titles, and an NBA Defensive Player of the Year Award, an NBA Rookie of the Year Award and selections for the 50thth and 75th anniversary teams.

Mark Smith, retired VP of Innovation Special Projects at Nike, Inc., and Jordan Brand Designer, worked in creative partnership with Jordan to design the new trophy, which will symbolize an NBA player’s journey to earning an MVP. Smith has collaborated with Jordan on countless projects over the past two decades. Artist Victor Solomon will craft the trophy annually.

The bronze trophy features a player breaking out of a rock to grab the ultimate rock – a crystal basketball. From bottom to top, the trophy’s patina becomes progressively more lustrous – “raw to refined” – symbolizing the MVP’s hard work and progression from entering the league to earning the NBA’s greatest individual honor. The reach of the trophy symbolizes an MVP’s endless pursuit of greatness.

Additionally, subtle nods are included throughout, paying tribute to the trophy’s namesake:

“I’m incredibly honored to have partnered with Michael Jordan to create the NBA’s MVP trophy,” said Smith. “Shaping Michael’s vision of his own pursuit of athletic achievement into this award was the opportunity and challenge of his life. When working together on this project, it was very important to Michael that the figure should not be a reflection of him, but that the recipient of the gift should identify himself in the award. For Michael, naming the award after him was recognition enough.”

Awarded to the Kia NBA Clutch Player of the Year 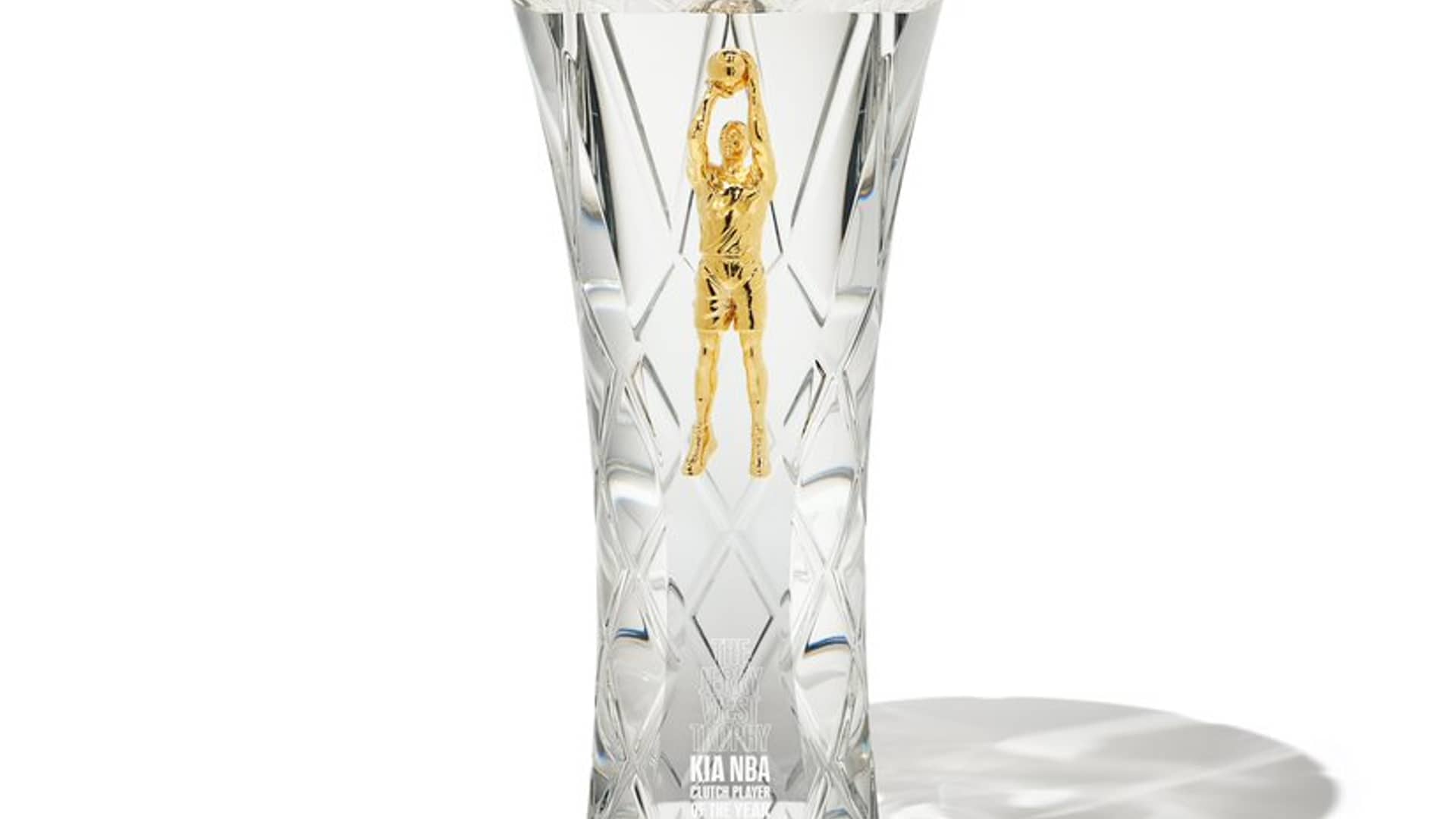 The NBA will introduce a new Kia Performance Award at the end of the 2022-23 season, the Kia NBA Clutch Player of the Year, with the recipient receiving the Jerry West Trophy.

Chosen by a media panel based on nominations from NBA head coaches, the award honors the NBA player who best asserts himself for his teammates in the clutch.

“There are few greater thrills as a basketball player than being there for your teammates and fans when they need it most,” said West, special advisor, LA Clippers. “This new trophy will be awarded to the player who performs best in those moments.”

READ :  'Why is this so easy for him?': 3x NBA All-Star Luka Doncic demonstrating his skills outside of basketball leaves fans in disbelief

The Jerry West Trophy and the following redesigned trophies awarded to winners of the Kia Performance Award were designed in collaboration with Solomon. The trophies are all embedded in a 15 inch crystal mesh structure. The front is flat to allow a direct line of sight of the icon and the engraving of the award and recipient is detailed below.

“As we worked with the NBA to redesign the league’s trophy offerings, our single goal was to create a cohesive collection of honors worthy of the athletes who raise them,” Solomon said. “These trophies celebrate the hard work of players who reach the pinnacle of individual excellence while honoring the NBA legends who defined that greatness.”

Awarded to Kia NBA Defensive Player of the Year 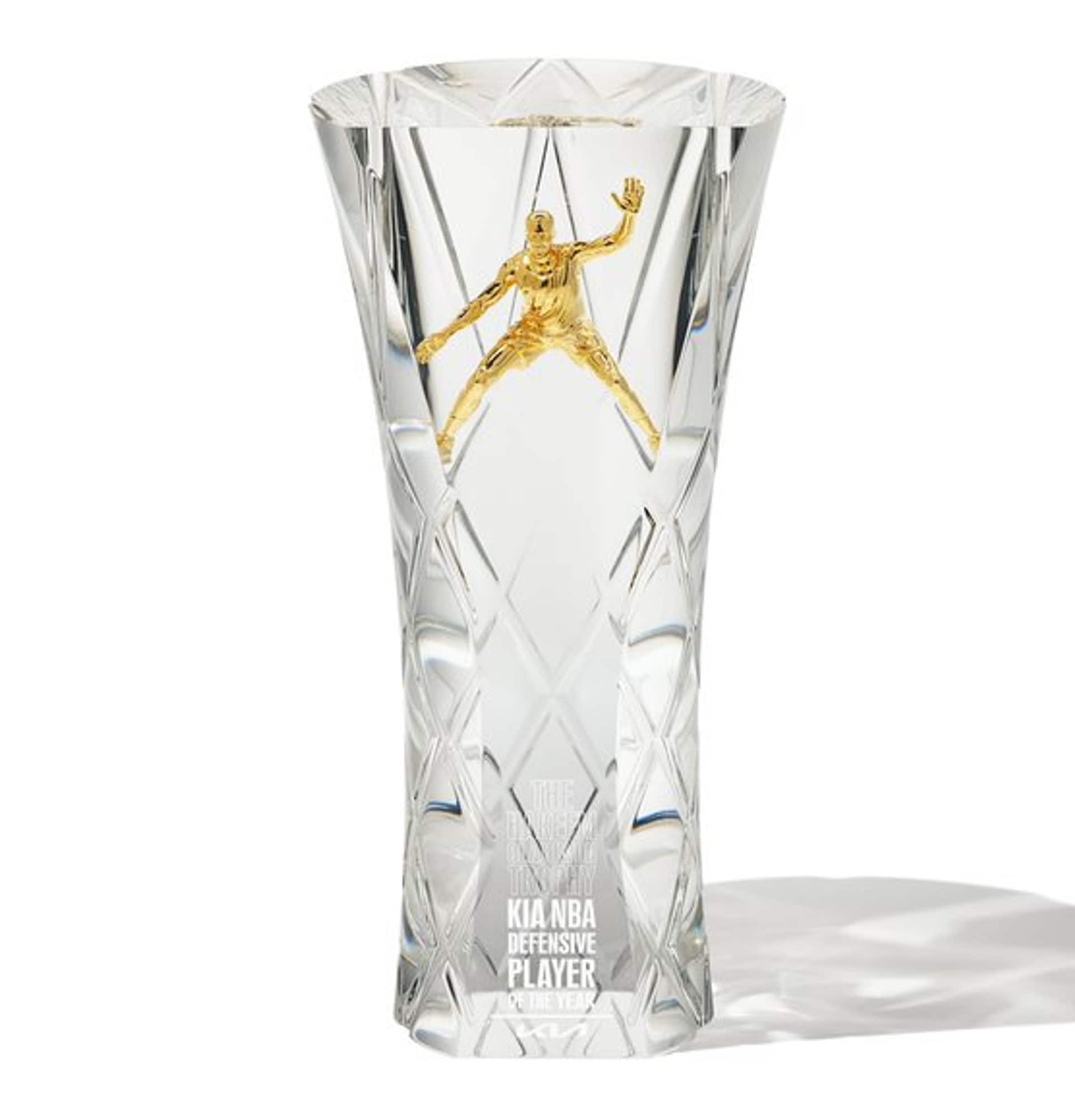 The trophy features a player in a classic defensive stance with one hand up and one hand down, knees bent and ready to move.

“I’m honored to have the opportunity to celebrate the best defensive player in the league every year,” Olajuwon said. “Great basketball teams are characterized by their defensive capability, with every great team connected by an elite defensive anchor.”

Awarded to the Kia NBA Rookie of the Year 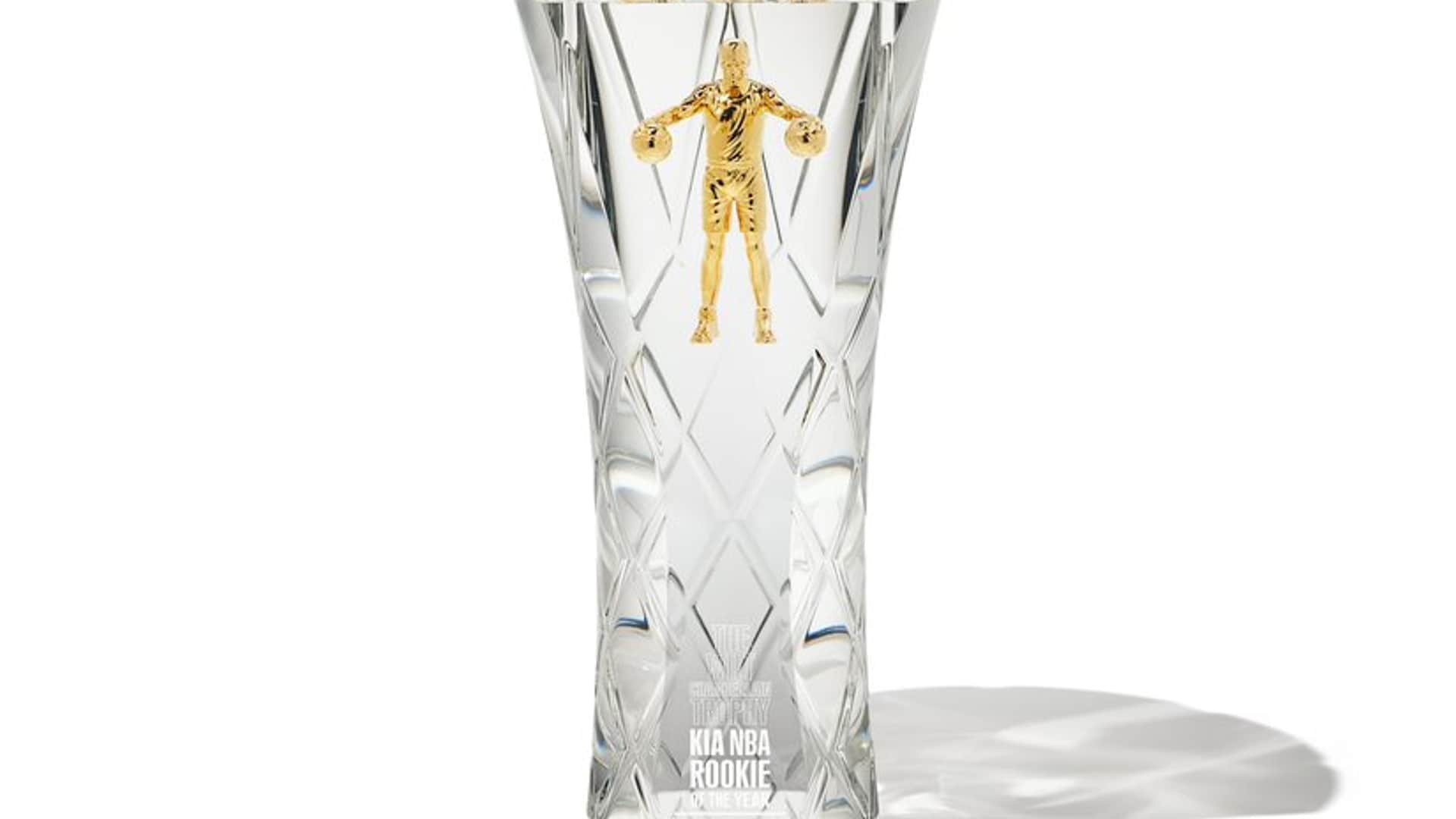 Wilt Chamberlain’s 1959-60 season is unmatched for an NBA rookie. Chamberlain averaged 37.6 points and 27.0 rebounds in 46.4 minutes per game for the Philadelphia Warriors and won both Rookie of the Year and MVP awards. His career highlights include two NBA championships, 13 NBA All-Star selections, four league MVPs, 10 All-NBA team selections, one NBA Finals MVP, and 35 league picksth50th and 75th anniversary teams.

The trophy depicts a player handling two basketballs at the same time.

“We are honored and grateful that the NBA has honored Wilt’s greatness with this honor,” said Wilt’s sister, Barbara Chamberlain Lewis, and the Chamberlain family. “Wilt rewrote almost every NBA record during his illustrious career, which ended with an incredible rookie season that redefined what was possible and set a ceiling for all rookies who followed him.”

Awarded to the Kia NBA Sixth Man of the Year 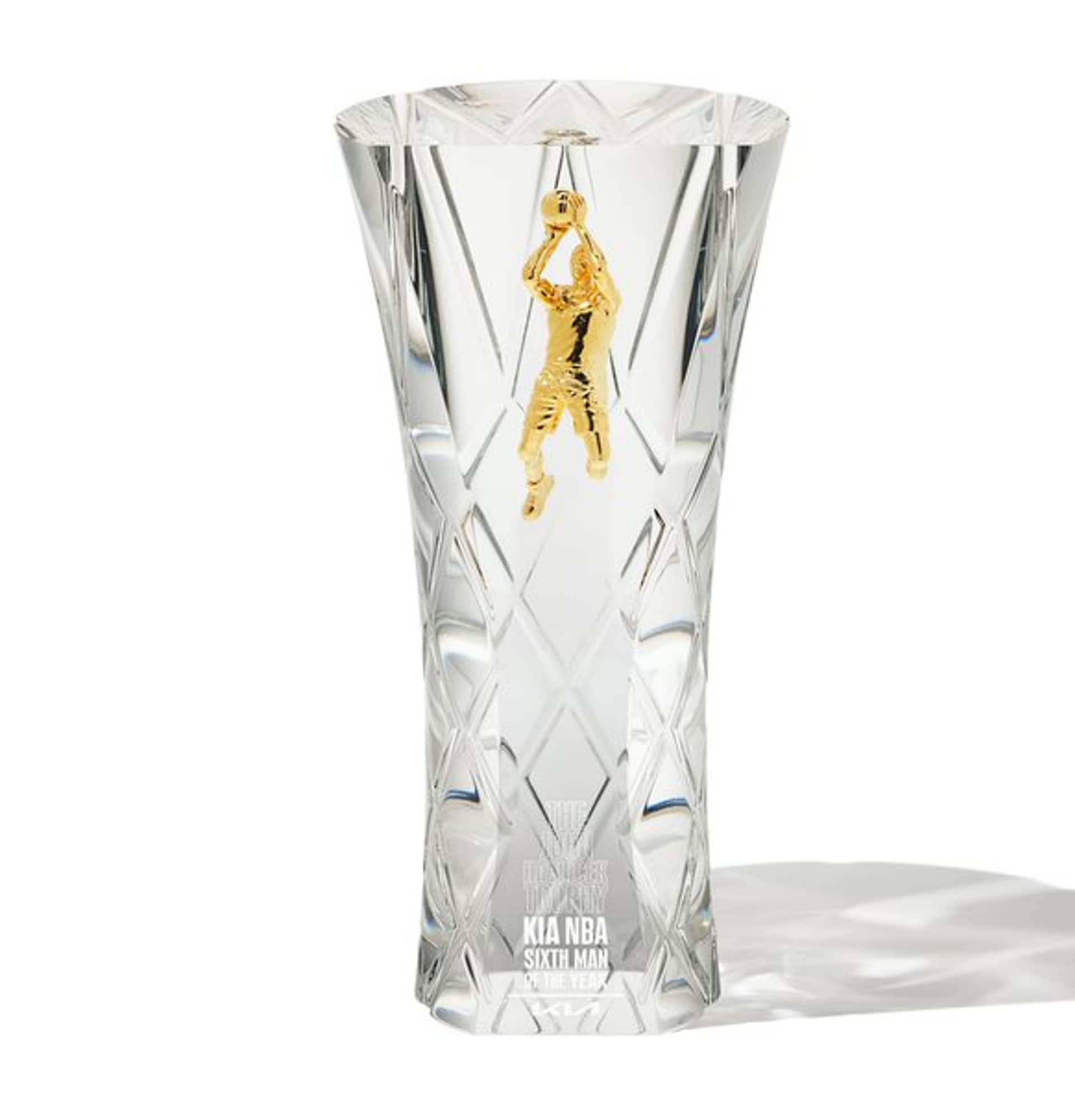 John Havlicek starred in his role throughout his Hall of Fame career and excelled off the bench like no other player before him. Havlicek came off the bench for the first seven seasons of his career and was an All-Star in four of those seasons. His career highlights include eight NBA championships, 13 NBA All-Star selections, 11 All-NBA team selections, an NBA Finals MVP, eight NBA All-Defensive team selections, and a place in the league’s 35th50th and 75th anniversary teams.

The trophy features a player raising and shooting a running jumper, symbolic of the boost the player is giving their team.

“We are honored that the NBA recognized John’s career achievements with this award,” said Beth Havlicek, John’s wife, and the Havlicek family. “John defined what it means to be the ultimate sixth man, using his leadership skills and outstanding play as the best example of successfully playing a team improvement role.”

Awarded to the Kia NBA Most Improved Player of the Year 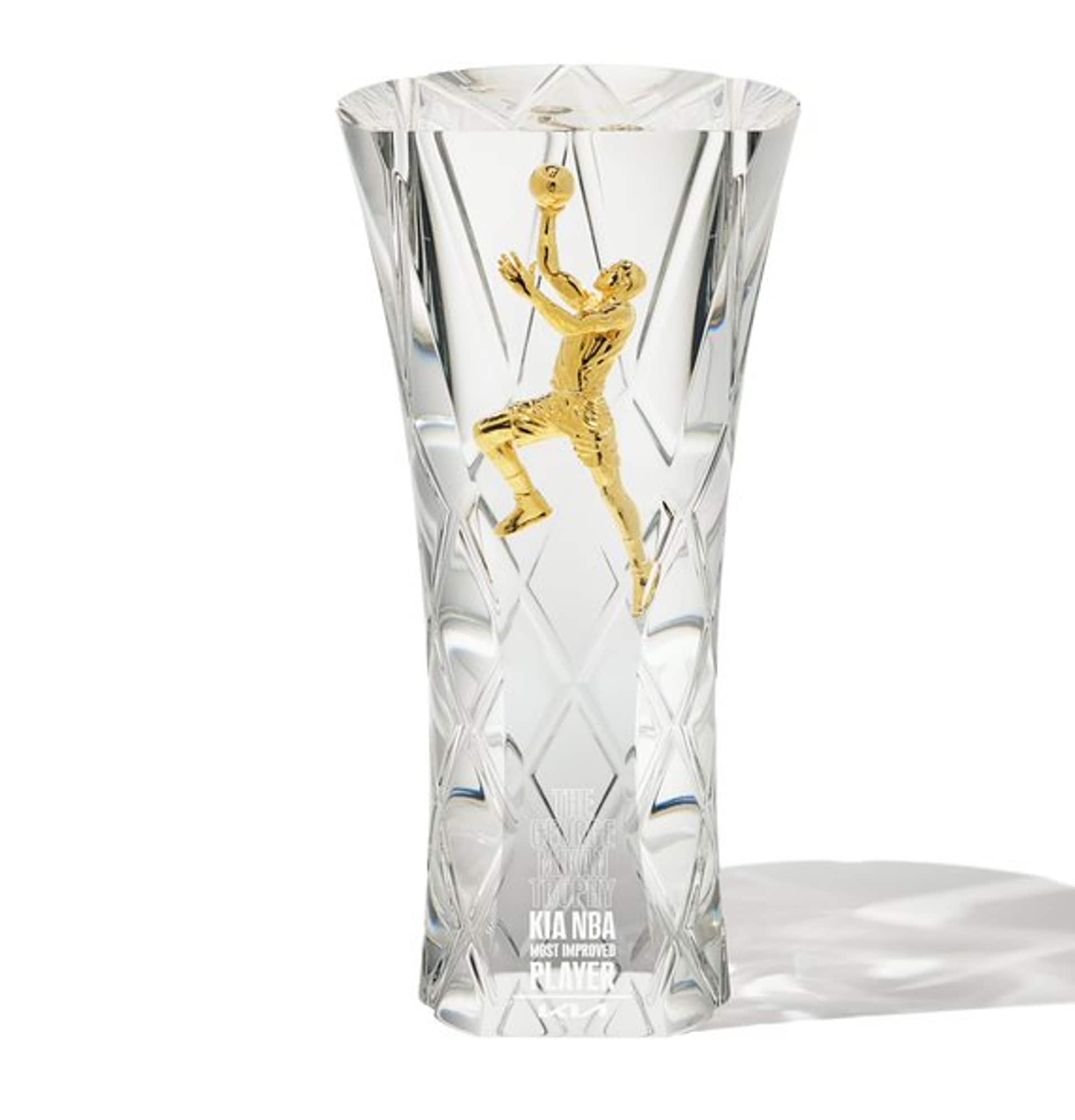 A layup and footwork drill known as the mikan drill has been used by players of all levels to improve their game for decades. It’s named for George Mikan, who became the NBA’s first dominant tall man to master the basics. His Hall of Famer career has included five NBA championships in seven seasons, four NBA All-Star selections, one NBA All-Star Game MVP, six All-NBA team selections and inclusion in the 25 NBAth35th50th and 75th anniversary teams.

“We are grateful that the NBA recognized George’s career achievements with this honor,” said Mike Mikan, son of George Mikan #99 and the Mikan family. “George is one of the greatest NBA players of all time, but perhaps his greatest legacy is what he passed on to others through his legendary ‘Mikan Drill,’ which has given generations of basketball players around the world the tools to… to improve their game.”

Today’s announcement builds on Kia America’s support of the NBA’s performance awards platform over the past 15 seasons.