Perhaps not the sins, but certainly the shortcomings of fathers are visited where one might expect in The Son, a sharply observed, cleverly acted sequel to The Father, which recently earned Anthony Hopkins his second Oscar.

Also written and directed by Florian Zeller, The Son stars Hugh Jackman as Peter Miller, a man who seems to have it all. A prominent New York attorney on the cusp of a long-awaited political career, with a feisty and loving second wife, Beth (Vanessa Kirby), and a brand new baby, Peter’s paradise is lost when his ex, Kate (Laura Dern), calls along disturbing news. Their teenage son Nicholas (Zen McGrath) hasn’t been to school in months. 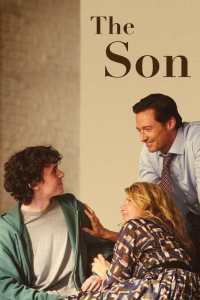 Movie poster for “The Son”

Desperate, she asks her ex to take care of and feed her vulnerable, unhappy child. Still wracked with guilt and somewhat hoping to be helpful, Peter agrees. This puts a considerable strain on his still fresh second marriage as well as his career ambitions.

This is not another study about a drug addicted boy and his desperate parents. Nicholas’ pain runs much deeper, seems embedded in his DNA and is compounded by the breakup of his family. He’s the sort whose mere presence brings with it an unsettling melancholy. That “not waving but drowning” aura the poet Stevie Smith wrote about.

Kate already knows she’s overwhelmed. And Beth rightly fears the implied threat of destruction that Nicholas carries with him. In one of the film’s most disturbing scenes, the boy offers to babysit when her regular babysitter cancels at the last moment. Peter wants to show his son that he trusts him, but instinctively heeds Beth’s understandable fear that leaving a child with Nicholas is about as safe as leaving him with a homicidal maniac.

Hopkins has a brief cameo that reminds us of the difficult upbringing Peter went through. But the film is less interested in finger pointing than in showing us the seemingly insurmountable odds that beset unfortunate children and their helpless parents. Everyone wants to do the right thing, but exactly what that is – and what the consequences might be – haunts every encounter.

The Son isn’t a brilliantly made film, certainly not compared to its predecessor, which so aptly captured the disorientation of spreading dementia. It’s a much more straightforward piece and as such might disappoint the more cinematically minded. Still, it’s an honest film, a well-made film that understands pain and isn’t afraid to show it in a subtle but haunting way. 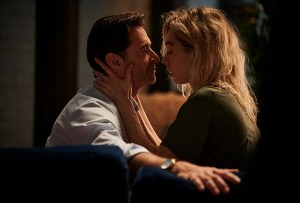 A scene from “The Son”

Dern, Kirby and McGrath transform their supporting roles into skillfully crafted performances of observation and support. But Jackman, whose meteoric rise to fame as a Marvel superhero has seemingly eclipsed his versatility as a dramatic actor, holds it all together with a performance that showcases his sensitivity, his explosiveness and even his comedic ability.

The film’s hard-hitting finale might be something you saw coming, but that doesn’t necessarily lessen its power. The Son is family dysfunction done right, a play that understands collateral damage is damage nonetheless and moving on doesn’t always mean moving on from pain.

The Son can be seen online on Hulu. It was released in limited theaters on November 25.