Researchers at the University of New Mexico’s Salinas Lab in the Department of Biology have discovered an immune structure in the nasal cavities of rainbow trout that scientists never knew existed. The new knowledge will allow fish immunologists to better understand the effectiveness of aquaculture vaccines. 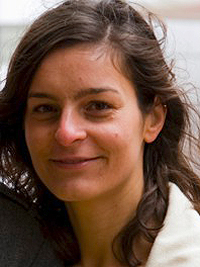 Although fish and mammals have similar immune systems, there are important anatomical differences. And for the most part, the immune system of non-mammalian vertebrates is not well understood.

The researchers found that this nasal immune structure exhibits molecular features of “germinal centers,” a response that occurs in humans when we are vaccinated or infected. Germinal center responses are often used as markers for vaccination responses.

“We knew about germinal center responses in lymphoid structures in humans, mice and birds, but we didn’t think the fish immune system architecture exhibited such structures,” said Irene Salinas, professor and chair of biology.

“A lot of people looked for it, including us, but we couldn’t find it, mainly because we didn’t have the right tools,” she said.

The research was published in a paper in the December issue of Journal of Immunology. UNM Biology Ph.D. Student Ben Garcia was the lead author. Fen Dong, Elisa Casadei, Pedro A. Castrillo, Julien Resseguier and collaborators from the University of Idaho are also part of this team and are co-authors of the publication.

“We’ve been studying the nasal immune system of fish for a decade, but we’ve consistently overlooked these unique structures full of lymphocytes,” Salinas said.

READ :  U of O researcher examines underlying mechanism involved in the locomotion of amphibious centipedes

By 2018, we dissected the trout’s olfactory organ from inside the fish’s nasal cavities, leaving the answer they were looking for. Castrillo, who is a veterinarian and has been visiting the Salinas lab for a few months, suggested that the discarded part be kept and the entire undisturbed nasal cavity examined.”

“We basically left that tissue behind, and that’s where that structure is,” she said.

The work, funded by a three-year $500,000 grant from the USDA’s National Institute of Food and Agriculture, is a groundbreaking study of the development of immunity that has implications for fish health, vaccinology and the US fish farming industry said Salinas.

The B cells in the germinal centers are part of the immune system and make antibodies to fight viruses and bacteria, giving researchers insight into how fish respond to vaccines. Much work remains to be done, as definitive proof that these structures function like mammalian germinal centers has yet to be established. This includes a series of ongoing experiments that would show that the B cells in the trout’s nasal germinal center-like structures mature in response to infection or vaccination. For this purpose, the sequences of the B-cell receptors, the so-called repertoire, are examined. Demonstrating the clonal expansion of specific B cells in response to a vaccine is a critical piece of the puzzle that remains to be completed.

“Up until now, when we were developing vaccines, we didn’t know where to look to measure the effects of the vaccine on the fish’s immune system,” she said.

With this new information, vaccinations in fish can be better understood, including the best interval time between doses of vaccinations that require more than one administration. There is also hope that the research may reduce the cost of vaccinating fish. The team hopes the USDA will continue to support their work to optimize aquaculture booster vaccines that can be administered without injection (mucosal vaccines).

Next, the lab will work on similar research in zebrafish that Salinas has been studying for years.

Salinas said she’s glad she was wrong after a decade of believing fish didn’t have germ structures because that’s how science works sometimes.

“It’s part of the journey,” she said.

Follow the development of ears of wheat since the Neolithic Revolution